Complementary programming of the exhibition All Power to the People. Then and Now. The revolutionary art of Emory Douglas and the Black Panthers.

Friday 9th September at 10pm
A fiction about revolutionary action and political activism in one of the films that best reflects the thinking of the American left in the 60s
– ‘Ice’ by Robert Kramer (1970, 103 ′)

Along with the exhibition to open on March 4 at Galeria Zé dos Bois, ZDB presented, in collaboration with Serralves, at Espaço Nimas, a series of films, some references and others unpublished in Portugal, about the Black Panthers.
In the inauguration session of the cycle we had the presence of a delegation of Black Panthers, available to talk about their experience: EMORY DOUGLAS, Minister of Culture of Black Panthers; ROBERT KING, Black Panther, political prisoner in the prison of Angola – USA for 27 years in solitary regime and BILLY X JENNINGS, Black Panther, historian and official responsible for the legacy of the Panthers.

Friday, March 4th at 10 pm – Galeria Zé dos Bois
Exhibition Opening
ALL POWER TO THE PEOPLE. THEN AND NOW.

Saturday 5th March at 21.30 – Espaço Nimas
Comrade Sister: Voices of Women in the Black Panther Party by Phyllis Jackson and Christine Minor
The Murder of Fred Hampton by Mike Gray and Howard Alk

Other actions complementary to the exhibition:

Following the complementary actions to the exhibition All Power to the People. Then and Now, namely, the cinema cycle and the Emory Douglas conference, ZDB is pleased to be able to present a conference by Ericka Huggins.
This unique opportunity, through the sharing of his personal experience, will allow to contextualize decisive moments of the Party of the Black Panthers. As one of the most emblematic women leaders of the Party and with a solid career in Women’s Studies in the USA, Ericka Huggins is the ideal interlocutor for a feminist approach to BPP.
This program also includes the screening of the film “Comrade Sister: Voices of Women in the Black Panther Party” by director Phyllis Jackson, with a presentation by Ericka Huggins.
And to finish: a welcome session to Ericka Huggins at a hiphop concert with seven of the most celebrated mc’s on both sides of the Tagus Estuary!

Wednesday the 1st of June at 18:00
Screening of the film with an introduction by Ericka Huggins:
Comrade Sister: Voices of Women in the Black Panther Party
Documentary composed essentially of several interviews with former female members of the Party. Addressing different subjects, the film presents us with close contact with the perspective of women in the Black Panther Party.
Introduction by Ericka Huggins
Production and direction by Phyllis Jackson and Christine Minor
(Work-in-progress) 58 minutes
In English

Wednesday 1st of June at 19h:
Ericka Huggins conference
The Legacy of the Black Panther Party: What about the Children?
Ericka Huggins was the leader of the Black Panther Party, a political prisoner and is currently a human rights activist, poet and teacher.
He awoke early to political activism, participating in 1963 in the March on Washington for Work and Freedom led by Martin Luther King.
Only 18, in 1969, she became the cell leader of the Los Angeles Black Panther Party cell, along with her husband John Huggins. After the murder of John Huggins on the UCCLA campus, Ericka Huggins moved to New Haven Connecticut and founded a new party cell.
In May 1969, Ericka and his comrade Bobby Seale were arrested on false charges of conspiracy to murder, giving rise to a large solidarity movement “Free Bobby, Free Ericka” with demonstrations and rallies organized all over the USA.
While awaiting trial, she was held for almost two years, until the charge was dropped. Much of the time she remained in prison was spent in solitary confinement, using meditation as a form of resistance.
As an educator, she was director between 1973 and 1981 of Oakland Community School, an innovative primary school and child development center founded by BPP and managed by the community. The curriculum developed at the center has become a model for other schools to follow. During this period, with the support of Maya Angelou and funds from the Bay Area Black United Fund, she also developed the After School Academy, a program dedicated to the needs of recurring students, seeking to establish a closer and more caring relationship between teachers and students. In 1976 Ericka Huggins became the first woman and first member of the black community to be appointed to the Alameda County Board of Education.
Huggins was also responsible for writing and editing the Black Panther Intercommunal News Service. His poetry and essays are published in numerous magazines and books, notably in Insights and Poems of 1974 written in co-authorship with Huey P. Newton.
For the past 25 years he has been giving lectures, sharing his extraordinary life experience, addressing topics such as human rights, education, political participation and social change.
As the woman who held the leadership role in the Black Panther Party for the longest time (14 years), Ericka has a particular point of view about the Party, its challenges and successes and its legacy in contemporary society.
Huggins currently teaches Women’s Studies at California State University-East Bay in San Francisco and Sociology at Laney College in Oakland, California.

Wednesday 1st of June at 10pm:
Concert
Welcome session to Ericka Huggins at a hiphop concert with seven of the most celebrated MC’s on both sides of the Tagus Estuary:
CHULLAGE
FIRST G
LBC SOLDJAH
HEZBOLLAH
IPAKO (TCHOLA and DIJAH)
SKEMA BLACK
RO

Visit of the delegation in collaboration with

the Art, Politics, Globalization Program of the Serralves Foundation 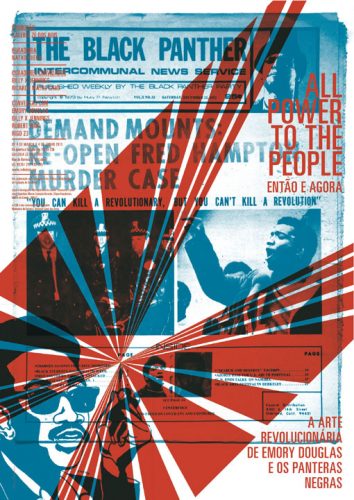 All Power to the People. Então e Agora.

— The revolutionary art of Emory Douglas and the Panteras Negras