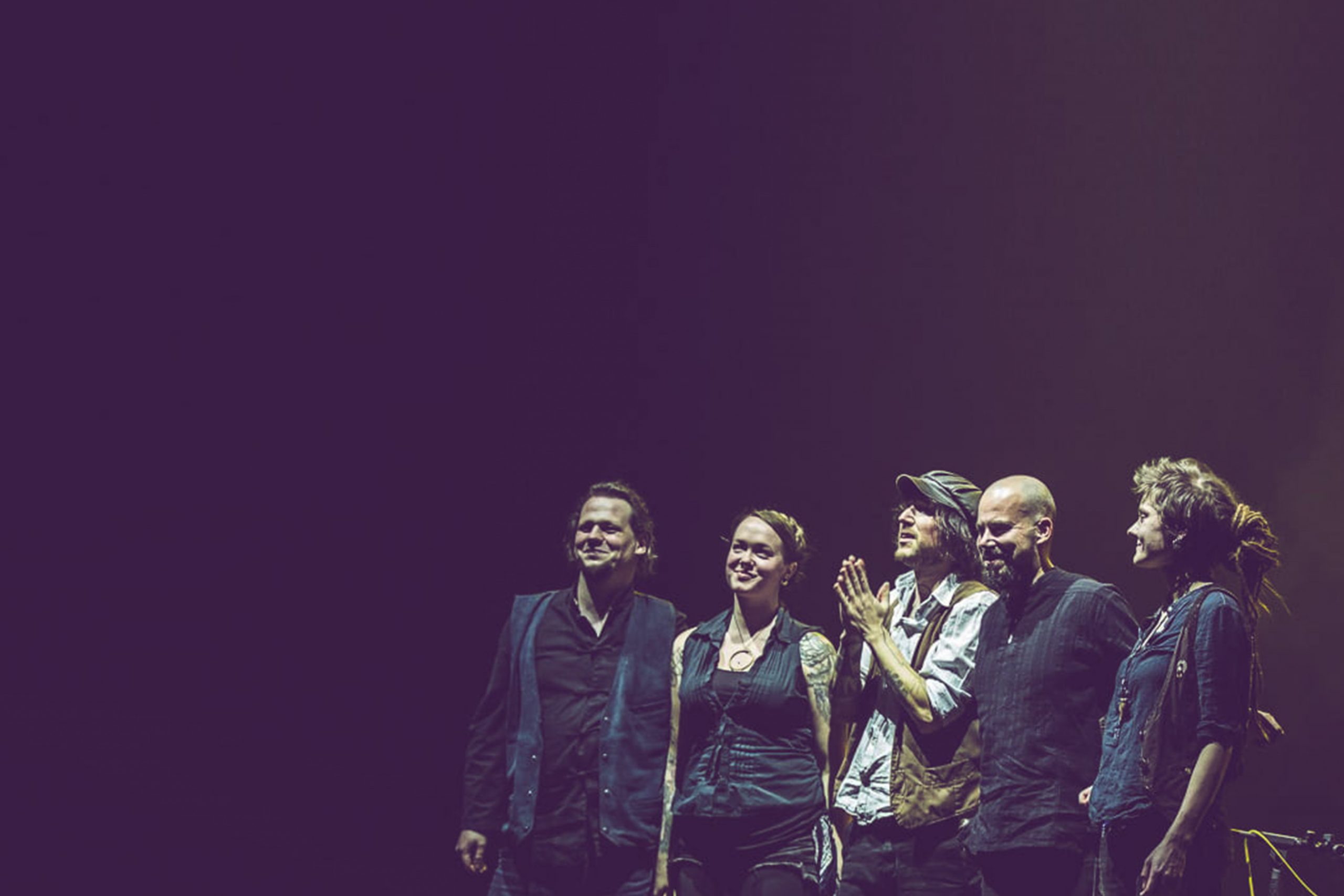 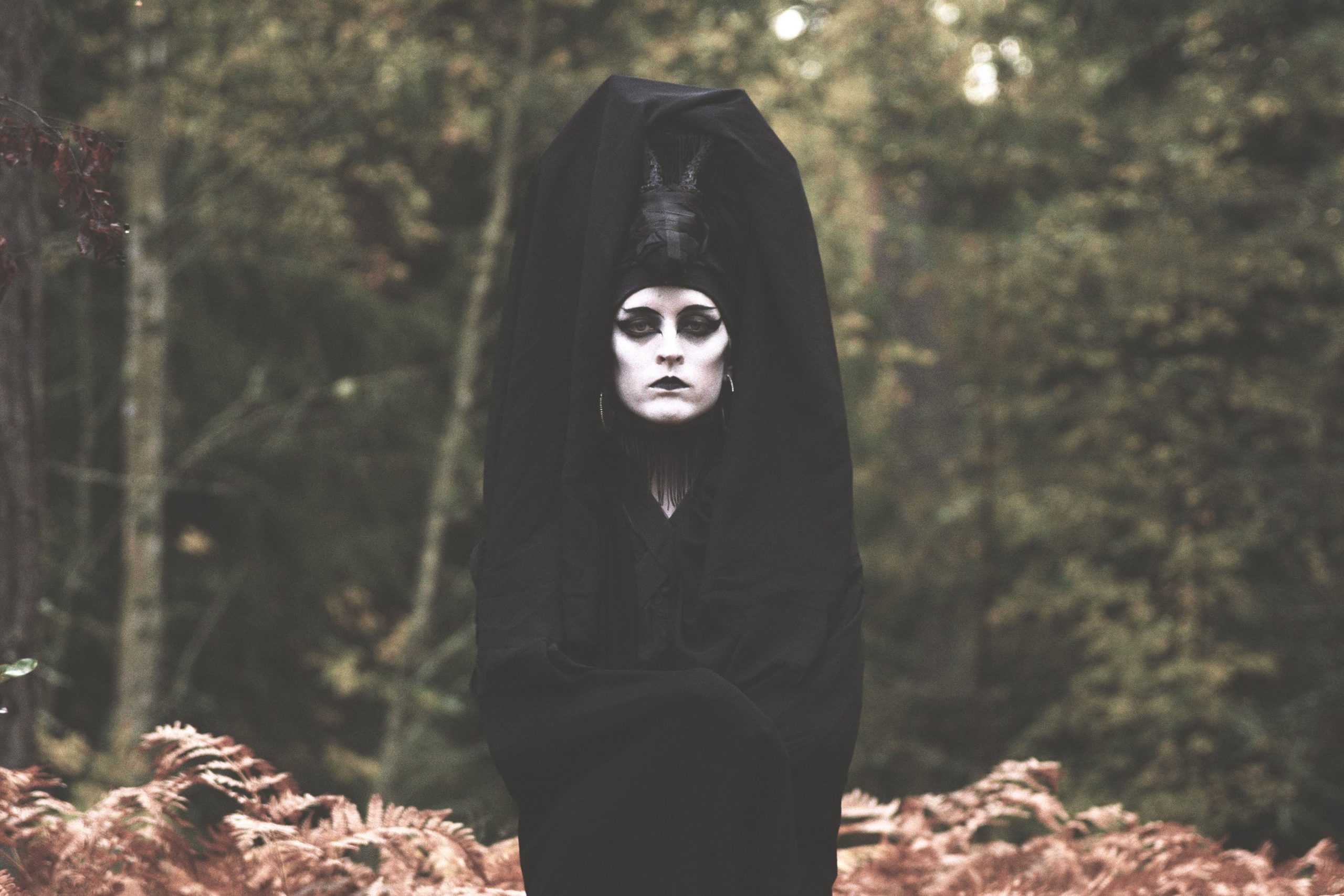 From 2007 to the present, Galicians Sangre de Muerdago have released 7 albums and another handful of EPs and singles. Their latest album, released in November 2020, has 11 tracks and is entitled Xuntas. Between pagan folk and chamber music, their repertoire features original pastoral ballads, prog-medieval compositions, and reinterpretations of traditional chants. In fact, there is something haunting about the genesis of Sangre de Muerdago that is still with them today, 15 years later: shortly before they recorded their first album, one of the founding members, the Brazilian Jorge Olsen de Abreu, died, and on the band’s last LP, Xuntas (2020), Jorge appears in the credits as the man responsible for “Melodias do Outro Mundo”. In addition, they recently released a video called Xuntas – The Movie, where a ghost woman attends a concert of the group in a theater in Leipzig, exchanging impressions with the spectators. At one point, a man from the technical team asks them “Guys, what does ‘Xuntas’ really mean?”, to which they reply in unison: “Juntas!”.

The members of the Sangre de Muerdago are: Pablo C. Ursusson, lyricist and main vocalist of the band, guitarist, accordion player, music box and bell player; Erik Heimansberg on second voices, flute, bass clarinet and Peñaparda tambourine (a kind of adufe); Hanna Werth, on viola and second voices; Georg Börner, on nyckelharpa and second voices; Asia Kindred Moor, on Celtic harp. In the sometimes politically dubious world of neofolk, the band carries a latent anti-fascist sensibility; not only has Pablo been involved in the Spanish punk scene, but they proudly sing in Galician, a language that resisted censorship and repression by the Franco regime (Galicians have a forked tongue). However, those who from the description are mistaken in imagining an intervention group in a literal, contestatory sense – the music of Sangre de Muerdago does not claim nor is it interested in the intrigues and politicking of men. However, this is not to say that the content and form of their compositions are not political, but they are in a much more spiritual and humanistic sense (e.g. the track with the curiously long title “Unha das peores cousas que escoitéi no 2019 foi ‘Pedir perdón é un ato de debilidade'” is a 6-minute instrumental).

Pablo’s gentle, soothing voice transitions effortlessly between the colloquiality of a songwriter and the formality of a bard. On the other hand, the way Sangre de Muerdago pair their voices and instruments in harmonies, sometimes open and flat, other times more intertwined and meticulous, leads us sometimes through dirt roads, through the dense flora of the forest, sometimes through moss-covered ruins, until we find shelter for a fire; the “touch” of the band is soft, but assertive (if we can use such imprecise terms), and is characterized by the same reverence and dignity with which the members give up their turn in the arrangements so that the next one can come up. AR

Grammy-winning Swedish singer-songwriter Jonathan Hultén began releasing material on his own when he was still a member of the heavy metal band Tribulation. His former bandmate Adam Zaars talks about his songwriting process in the band: “Jonathan mostly worked alone, recording demos at home and then sending them to us for feedback. That said, it’s not hard to imagine that some of the lonely, homemade drafts that didn’t pass the Tribulation sieve found a second chance in his solo project… After all, according to Jonathan himself in an interview, “the emotional core can be the same for both an acoustic and a metal song.”

In fact, it is possible to see a certain aesthetic and poetic continuity between the solo Jonathan Hultén and the former Tribulation member. At the risk of superficiality in this observation, Jonathan still uses black and white face paintings in his music videos; but while those of his former colleagues constituted a more traditional Scandinavian corpse painting (blurred, evocative of corpses and demons), Jonathan’s showed already a different kind of ornamentation and detail, evocative of a certain mysticism, spirituality, and exoticism (e.g. Siouxsie at the time of the hit “Arabian Knights”).

First, he released an EP, in 2017, entitled The Dark Night Of The Soul; then, in 2020, a feature-length that earned him major media exposure, Chants From Another Place, on the London label Kscope. Throughout the 12 tracks of this LP, Jonathan Hultén uses the acoustic guitar (discreetly and occasionally accompanied by keyboards and percussion) in an elementary but effective way – it is precisely this instrumental simplicity that lowers the listener’s guard and guarantees the success of the spell; then he places his voice without ever fully binding himself to this or that folk territory (at times it approaches the confessionalism of Nick Drake; at others, the triumphalism of Leonard Cohen; at others, the solemnity of church choirs). Through fantastic interludes and emotionally ambiguous harmonies, Jonathan Hultén takes us, in his words, on “an inner journey, and only time can tell which places will be visited during its duration.” AR