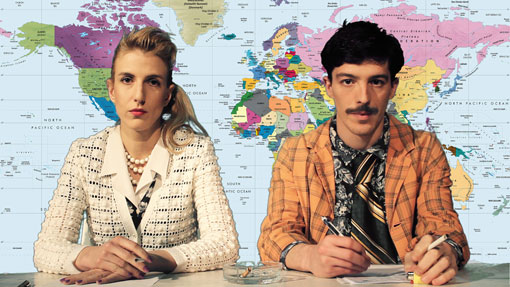 THE WEATHER ™ is a dance show composed by the kaleidoscopic effect of multiple duets: the duet between Mariana Tengner Barros and performer and creator Elizabete Francisca, the duet between these and the dancer and choreographer Luís Guerra, between the real and the virtual, between the two-dimensional image of the video and the real image of the body in motion, called “live” or i.e 3D, a duet between all of this and the psychedelic band of Cacilhas – “JESUS K & the sicksicksicks”, without forgetting the dialogue with the choreography in the eyes of public.

Choreographed End of Transmission for Ballet Contemporâneo do Norte and Dance Against The Machine for the company Londrina Edge-The Place (2014), both projects in collaboration with musician Jonny Kadaver.

She was also part of the Solo Performance Commissioning Project (SPCP) in 2009, directed by choreographer Deborah Hay (Findhorn, Scotland), having debuted her adaptation of the choreography under Nome Eira # 3, in Lisbon (2011).

Graduated in dance by the Northern School of Contemporary Dance-NSCD (England 2003) where she received the University of Leeds Arms Prize for “Outstanding Achievement”. Did an internship at the Ballet Theater Munich, under the artistic direction of Philip Taylor (Germany 2004). Completed the Program of Study and Choreographic Creation-PEPCC (Portugal 2009) of Fórum Dança, trained by Francisco Camacho, Vera Mantero, Miguel Pereira, João Fiadeiro, Deborah Hay, Lisa Nelson, Mark Tompkins, Meg Stuart, among others.

Between 2004 and 2005 she was an associate artist at the Northern School of Contemporary Dance-NSCD, where she choreographed Best Imitation of Myself for the company VERVE05 and co-founded the artistic collective The Resistance Movement with Said Dakash, in Leeds / England.

Eira and A Bela – Associação